Utilizing zero-birefringence polymer and highly scattered optical transmission (HSOT) polymer technology, we aim to propose a new LCD system through total design which considers all aspects from the backlight to the LCD panel.

The LCD industry has made great strides after its advent in Japan, but as a result of severe international competition, a large share of the market is now occupied by overseas companies. In particular, shares have been taken over by downstream companies such as for LCD TVs and LCD panels, and parts such as the backlight, polarizing plate, and optical film are subject to intense competition. The superior image quality and performance of the LCD display is achieved by numerous parts. By improving the performance of these parts, the image quality and performance of the LCD display will continue to improve. Achieving this will result in strengthening the international competitiveness of Japan's parts makers and LCD display industry henceforth. In this theme, we will develop a new optical film, backlight, and adhesive utilizing photonics polymers ("highly scattered optical transmission (HSOT) polymers," "zero-birefringence polymers and zero-zero-birefringence polymers"). Furthermore, rather than simply improving the performance of each part, our aim is to implement "total design" which considers the entire LCD display to realize a new LCD display system with the world's best standards of image quality and low power consumption. 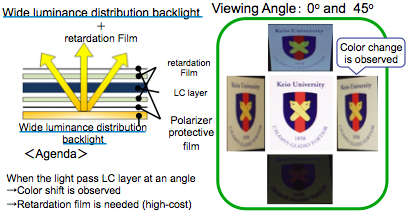 Formerly, the birefringence of the light passing at an angle through the liquid crystal layer was compensated with retardation film to produce a wide viewing angle. 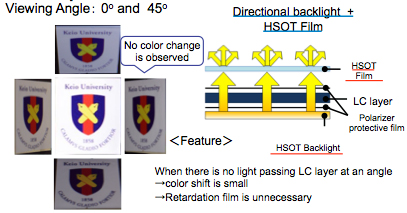 With the new method, applying the HSOT Polymer as the backlight and film will make for an LCD with small color change depending on the viewing direction.

We will realize highly efficient film production through the melt extrusion method using zero-birefringence polymers, and aim to provide low cost and the highest performance film in the world.

Birefringence which occurs when polymer main chains is oriented at above glass transition temperature (Tg).

Zero birefringence is produced by cancelling out the anisotropy within the polymer chain through copolymerization of monomers with different polarizability anisotropy (random co-polymerization). 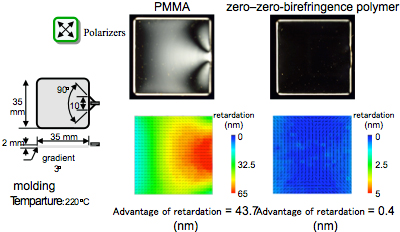 Birefringence occurs in generic polymer materials during injection molding. As both birefringences in zero-zero-birefringence polymers are accurately cancelled out, light leakage due to birefringence is not observed. 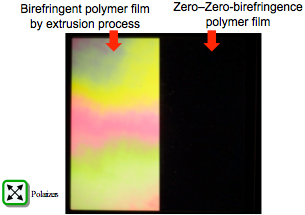 By manufacturing optical film for LCDs using the melt extrusion method which has high production efficiency, we expect to produce LCDs with high image quality at low cost.

Observation of extrusion molded film (at right)
With ordinary polymer film, light leakage and color irregularities due to birefringence is observed. (photo at left)

With zero-zero-birefringence polymers, light leakage does not occur and "black" is observed. (photo at right)

We are developing thin, low power consumption backlights using highly scattered optical transmission (HSOT) polymer which can scatter light with high efficiency and produce high grade irradiated light. In a rapidly changing LCD field, we are aiming to realize a high performance backlight which meets the needs of the marketplace. 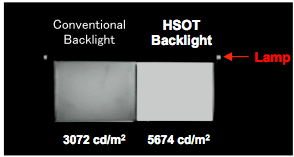 We have created the super birefringence film based on over 20 years of research to produce a zero birefringence polymer, and by changing our mindset and reversing course. This is a completely new, never before seen optical film possessing a very large birefringence (retardation) of 8,400-10,500nm. It resolves the rainbow-colored irregularities which occurred due to the film's birefringence which was considered a problem in LCDs. In addition, by attaching this super birefringence film to the front surface of the LCD panel, the polarization phenomenon where the screen would appear completely dark when wearing polarized sunglasses would be resolved, making the image clearly visible. 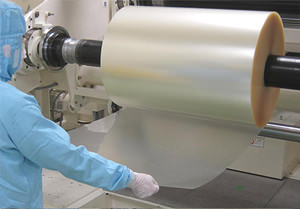 【Main journal papers and patents relating to these researches】

【Main journal papers and patents relating to these researches】

In pursuing design and trial manufacture of light-guiding plates and prism sheets for backlights, we succeeded in trial manufacturing a backlight possessing the world's highest standard light harvesting properties. We are proceeding with total design incorporating this property to create a backlight for a revolutionary LCD.

(2) Direct type:
We are proceeding to design a backlight for a large type LCD TV. We are aiming to create thinner backlights by placing highly scattered optical transmission (HSOT) polymer elements on LED elements to control light distribution. We are currently proceeding with design and trial manufacture through simulation, and have succeeded in deriving a superior color mixture performance. 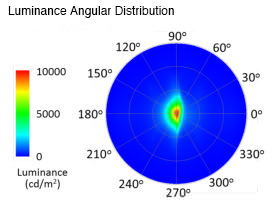 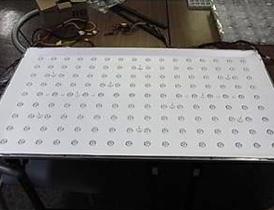 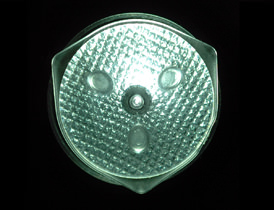 Utilizing zero-zero-birefringence polymers which do not exhibit orientational birefringence and photoelastic birefringence, we designed and trial manufactured polarized laser backlights, and demonstrated for the first time its superior polarized light output characteristics. 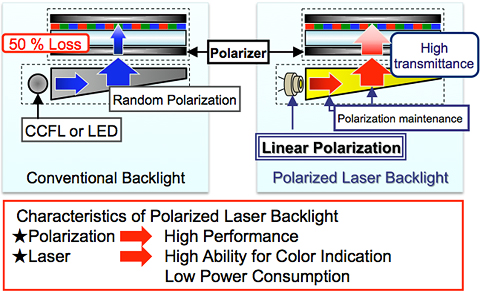 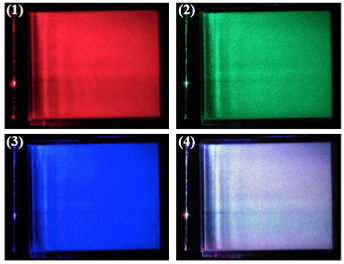 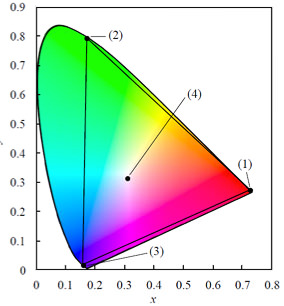 【Main Journal papers and patents relating to these researches】